When many of us think about chimneys and fireplaces, we think of that romantic idea of the wood burning fireplace, when in reality, a lot of us have a gas fireplace, particularly if you live in a newer home.

Why do many homes have gas over wood? Why have many people made the conversion? We asked CSIA instructor and CSIA Master Chimney Sweep® Jim Brewer about the benefits of gas fireplaces. Jim is one of the instructors who teaches the Gas Install and Troubleshooting class offered at the Tech Center each year.

Gas Venting Basics
Most homeowners are aware of the need for chimney cleaning and inspection if they own a wood-burning stove or regularly use their fireplace, but many don’t realize that a gas heating appliance-whether it is a furnace, boiler or even a hot water heater-also relies on the chimney for proper venting of the exhaust.

​Appliances fueled by natural gas or propane may not produce the visible soot that appliances burning other fuels do, but they can deposit corrosive substances in your chimney. In many cases, these acids may wreak havoc on your chimney without producing any external symptoms until the problem has become dangerous or expensive to repair. 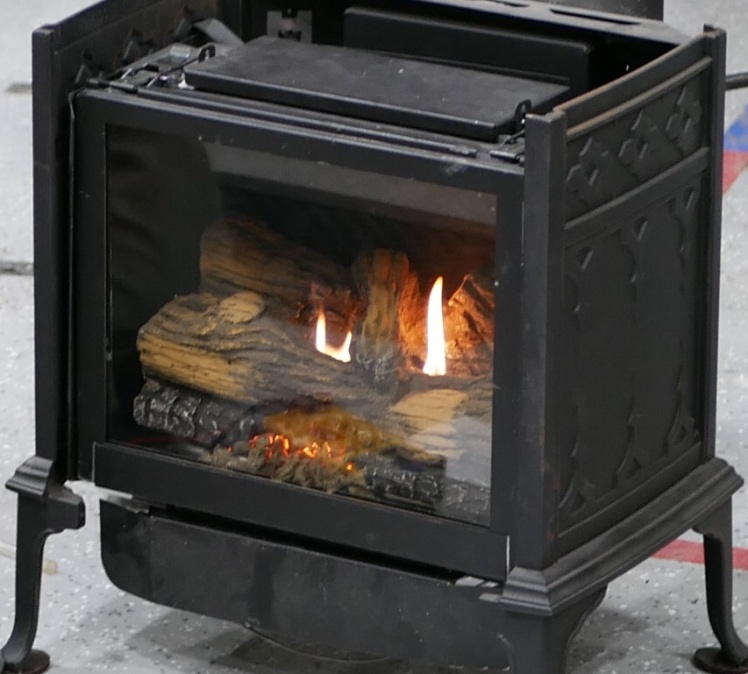 The Problems
The problems lie with the modern higher efficiency appliances. These appliances gain their higher efficiency by extracting the heat that used to be sent up the chimney and delivering it to your home instead. No one wants to waste heat up the chimney, but a certain amount of heat is necessary in order to provide the draft that makes the venting system work, and to keep the chimney walls warm enough to prevent condensation of the flue gases. If the flue temperature becomes too low, as is often the case with modern appliances, two separate but interrelated problems- incomplete combustion and water condensation- can occur.

Incomplete combustion:
The chimney is responsible not only for simply letting the combustion byproducts passively escape up the flue, but it also generates draft that actively pulls combustion air into the appliance. In fact, burning one cubic foot of natural gas requires 10 cubic feet of air to provide enough oxygen for complete combustion. If the chimney is too cool to create adequate draft, thereby not providing enough combustion air, not only does efficiency suffer, but the appliance can produce carbon monoxide, and this carbon monoxide is less likely to be safely exhausted from a chimney with a weak draft signal.

Condensation:
The second and most obvious problem from cool chimney temperatures is the condensation of water vapor inside your chimney. As odd as it may seem, the combustion of any hydrocarbon-and gas is a hydrocarbon-results mainly in carbon dioxide and water vapor. In fact, the average furnace puts about 1 1/2 gallons of water into your chimney every hour! The high stack temperatures of the older inefficient furnaces kept this moisture from condensing inside the chimney, and it was often visible as steam escaping from the chimney top. Because the newer high efficiency furnaces now steal this extra heat from the chimney, all this water now often condenses inside the cooler flue.

The problem becomes even more complicated however because this water is also usually highly acidic and corrosive. The air used for combustion is generally contaminated with not only normal air pollution, but often with household cleaning products, especially chlorine from bleach. If the chimney was previously used to vent coal or oil there are most likely also sulfur deposits left inside too. So now not only do you have a gallon or more of water an hour in your chimney, you now have a gallon or more of dilute hydrochloric or sulfuric acid eating away at the mortar and brick of your chimney from the inside!

The situation is aggravated by cold exterior chimneys and long runs of connector pipe between the furnace and the chimney. Although your chimney may be suffering from an improper heating/venting match without producing any visible symptoms, sometimes the excess moisture produced causes visible results.

Any of the following symptoms could point to a venting system problem.
Damp patches on interior walls or exterior walls
Peeling wallpaper
Blistered paint
Stains on the ceiling around the chimney
White stains (efflorescence) on the outside of the masonry chimney
Eroded mortar joints
Crumbling bricks

Eventually corrosion caused by this acidic water condensing inside the flue may cause the liner, mortar, and brickwork to flake and crumble. Chimney sweeps often find this debris creating blockages in the flue, potentially exposing the occupants of the home to carbon monoxide and other dangerous combustion byproducts, a situation not to be taken lightly.

Solutions
The first step is to have the chimney/venting system evaluated by a competent Certified Chimney Sweep®, someone who understands the relationships between furnace and chimney type. A qualified sweep can offer advice and recommend measures to make your entire system function safely and efficiently.
​
If a problem is found, the solutions often involve installing a correctly sized, insulated liner, and/or reworking the connector pipe between furnace and chimney. These upgrades are designed to resize the flue for better draft, minimize the condensation, and contain the acidic byproducts within the liner to protect the surrounding masonry. (See our page on liners for more information)
​
A few dollars spent on corrective measures could save thousands in expensive chimney repair down the road, and will help protect your home and family.