Yes … this is “just” a van, but it’s really just another vehicle to convey our message.

There are thousands of homeowners (and businesses) that regularly use their fireplace, wood stove and masonry heaters, and thus know the importance of annual maintenance.

But there are countless residences across America that don’t realize the critical value of an inspection. There are many people who aren’t even aware of the robust and growing industry of chimney sweeps.

And CSIA believes we offer the best credential in the business — CSIA Certified Chimney Sweep; you can find one in your zip code at csia.org/search.

“As you can see, we have our website [csia.org] prominently displayed on one side of the van,” said Frances L. Kelly, executive director of the Chimney Safety Institute of America. “We have about 1,500 CSIA Certified Chimney Sweeps, and we aggressively publicize our web site, so that consumers go there, they can locate a sweep simply by typing in their zip code.”

The design was done by David Bruce, who is also the creative artist behind the newly redesigned Sweeping Magazine, the publication put out by the National Chimney Sweep Guild.

The NCSG and CSIA are housed in the same facility in Plainfield, Indiana but have separate boards and missions.

Both organizations jointly financed the purchase of the 2013 Ford and split the costs of the colorful wrap on the vehicle exterior. 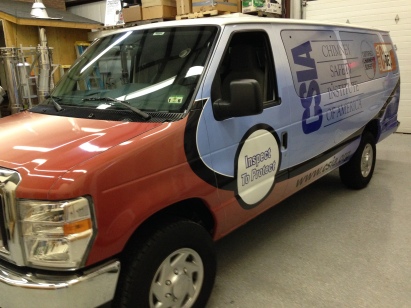 The van, which replaces a 1997 model used at the facility for over a decade, is used to transport students during our National Chimney Sweep Training School.

It is also used by marketing staff to haul our organizations’ trade show booths to different cities. And look for it on Interstate 70 and 76 as the staff heads to Lancaster, Pennsylvania for the 2015 NCSG Convention!